History of The Oaks School

In the autumn of 1985, a small group of parents began the search for a progressive, child-centered elementary school. Their children attended the same preschool, and the parents were looking for a Kindergarten program that would continue to provide same individualized and progressive education. Unable to find a good program in the Hollywood area, they decided to start their own Kindergarten on the premises of St. Thomas the Apostle Church. Under the leadership of Deborah Wyle as the first principal and program director and Tinker Beatty as Board Chair, The Oaks School opened in September 1986, with 11 children enrolled in Kindergarten.

In 1986, The Oaks School incorporated as a non-profit educational institution and moved to the historic Hollywood United Methodist Church, renting two classrooms for a Kindergarten and 1st grade in 1987. In July 1990, Chloe Eichenlaub joined as Head of School, and in 2000, Mary Fauvre, Ph.D. became the school’s third Head of School. In 2010, after a national search, Ted Hamory was named the fourth Head of School. During his tenure at the school, he has added exciting new programs, renovated and improved the historic campus, and added a beautiful new outdoor field and green space.

The Oaks School is a well-respected progressive elementary school, sought after by parents looking for a strong education in a warm and nurturing community. Graduates of The Oaks are well-prepared, confident, and kind individuals who matriculate into a wide variety of independent and public middle schools in the Los Angeles area. 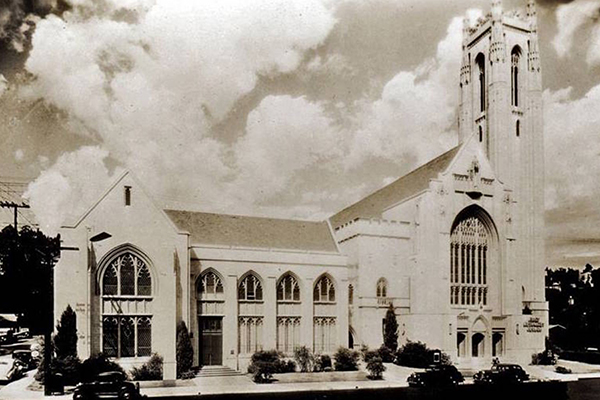 The Oaks School is located on the campus of the historic Hollywood United Methodist Church (HUMC). Constructed in 1927, this campus quickly became a local landmark. A postcard from the time describes the church building as “…one of the most famous churches on the Pacific coast,” with an atmosphere of “…reverence in symbolic beauty and compelling stillness.” It is within this magnificent environment that the school operates. Our classrooms are large and light-filled and many have original stained glass windows. Recent renovations have modernized the infrastructure and restored much of the campus to its original beauty. There are classrooms, a large library, and music, art, and Maker studios. A full-sized gymnasium is used for physical education classes and a new field and outdoor green space has been added, providing a beautiful outdoor environment. While The Oaks is not affiliated with the HUMC, the school and church work together to maintain and preserve the campus.

In December 1981 the church was declared Historic-Cultural Monument #248 by the City of Los Angeles.